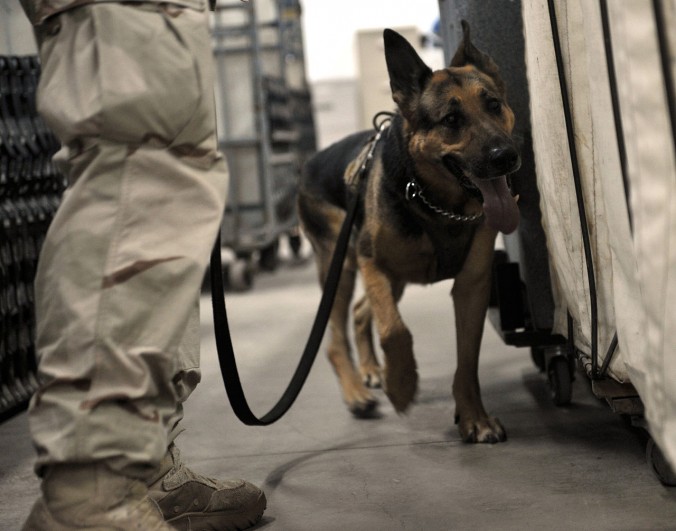 Specially trained canine units patrolling busy U.S. ports are some of the Coast Guard’s newest weapons in the 21st-century war on terrorism. Each year, U.S. ports host thousands of foreign-flag ships carrying multinational crews and cargoes from around the globe. Former Coast Guard Commandant Admiral James Loy noted that the 11 September 2001 attacks could have occurred at maritime facilities.

The key to successfully combating maritime terrorism is maritime domain awareness (MDA): complete knowledge of which ships are on the ocean and of the people and cargo aboard them. It enables law enforcement agencies to focus their scarce resources on specific vessels of interest. Ideally, MDA takes place as far away from U.S. waters as possible, even in foreign ports before ships depart for the United States. In some cases, however, the Coast Guard must board and inspect vessels in or just outside U.S. ports.

High-interest vessels (HIVs) generally are large foreign commercial vessels (600-1,100 feet long), often with all-foreign crewmembers. Law enforcement officials decide whether to board them depending on factors such as their flags of registry, crew nationalities, types of cargo, and last ports of call. Bostonians probably are most familiar with the large liquefied natural gas carriers that are HIVs. After the 11 September attacks, they were prohibited from entering the port of Boston until adequate security measures could be put in place. HIVs require differing levels of scrutiny by the Coast Guard, Immigration and Naturalization Service, Customs Service, and-oftentimes-counterpart agencies in other nations.

Dogs are especially useful for searching large HIVs (including cruise and container ships) because of the many sizable areas where explosives, terrorists, and terrorist-related materials can be hidden. An incident in October 2001 demonstrated the possible threat. Egyptian Rizik Amid Farid was intercepted dockside in Gioia Tauro, Italy. Unlike most stowaways, he was smartly dressed and found living in a 40-foot cargo container. Farid’s comfortable living accommodations included cell and satellite phones and a computer. He also had airport diagrams, credentials indicating he was a aircraft mechanic, a Canadian passport, and a one-way airline ticket to a foreign destination. Obviously, Farid carried documents and apparatuses that an illegal immigrant would have been unable to obtain or afford.

Dogs are not new to the Coast Guard or the port of Boston. During World War II, the service’s Beach Patrol used 1,800 dogs to protect coastlines, ports, and harbors from German incursions and sabotage. The Coast Guard has renewed its interest in using them for homeland security because of their ability to substantially reduce the amount of time spent searching for suspicious people and cargo. In 2001, data indicated that less than 2% of the 6,000,000 shipping containers that entered the United States annually were inspected by law enforcement agencies.

As of this month, the Coast Guard has 19 dogs trained to detect explosives. Each canine will be paired with a human handler. Dogs and masters will bond by eating, sleeping, and training together for most of the animal’s life. As in World War II, human-canine teams will be as efficient as two or more people (depending on circumstances) in searching HIVs and other large ships. Future applications could call for sending these teams out to search ships before they enter port.

Trained detector dog-handler teams are skillful at exposing explosives and other hazardous materials that terrorists may try to smuggle into U.S. ports in foreign trade ships. The dogs have proved their mettle in a number of situations and gained the reputation for great alertness and for being formidable attackers. According to one government study, a large dog, attacking with teeth bared, is often a more dangerous adversary than a man with a gun. Other government studies indicate that the dogs’ security usefulness is increased significantly when an enemy’s religious beliefs hold that canines are unholy and unclean. In such cases, the mere knowledge that the Coast Guard employs canines might dissuade would-be attackers of ships and critical facilities.

Dog-handler teams will be part of welltrained Maritime Safety and security Teams (MSSTs), Coast Guard professionalswho provide highly mobile boat forces and security elements for protecting ports. The MSSTs are billed as the Coast Guard’s special forces, with teams based around the United States, including near Boston. They are rapid-response organizations that can deploy humans and canines within hours to distant locations for antiterrorism operations.

The Coast Guard has taken old tricks and updated them for the war on terrorism. Using canines as guards and detectors of stowaways and explosive materials may well prove more advantageous in this war than it was in the past.