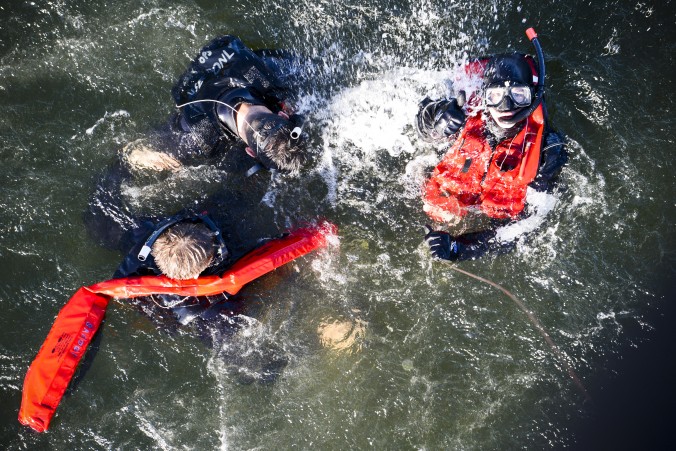 December, 1995 / Captain W. Russell Webster / Comments Off on Rescuers Can Be Victims, Too

Existing Coast Guard boat-crew fatigue standards are based on wave heights and time under way and do not consider the effects of post-trauma stress (PTS). It is time to develop tools for boat coxswains (those who maneuver and have ultimate responsibility for small boats) and Coast Guard station officers-in-charge (OinCs) to better evaluate their own and their boats crews’ mental health. The work of recovering the dead and aiding the injured can affect even the thickest-skinned rescue workers, albeit in different ways. Without proper debriefings and other follow-up care, rescuers ultimately can be victims, too.

The Past
Most of the time, young boat-crew members just throw up after their first dead-on-arrival (DOA) recovery. 1 Sometimes flashbacks from some part of the rescue attempt haunt their dreams. A veteran Coast Guard OinC recalls, “I can still remember my first and worst of 19 DOA recoveries. A 13-year-old boy had drowned while diving from a wharf in a nearby town. I was a boot [a new recruit] then, but I remember searching fruitlessly for two days to find this boy. We found him on the third day, after a bad thunderstorm the night before. He was bloated badly, with white foam coming from coming from his mouth; his eyes were bulging from their sockets, and he had a look of holy terror on his face. For the most part, the crew said nothing on the long trip back. You could see the look of sadness on their faces. Over the span of my 26-year career, I’ve thought about this 13-year-old and his family. I’ve seen him in a nightmare or two over the years.” 2

He also vividly remembers an incident in July 1977 in a small town in Kentucky: “Three kids, ages three, seven and nine, lost their lives in a drowning incident. A drunken uncle on a family outing had been babysitting the children on a small island. The brothers decided to go for a walk along the beach with their younger sister. When the coxswain arrived on scene the uncle was hysterical and screaming. Three hours later the seven- and nine-year-olds were located downstream, dead, still holding hands after being sucked into a sinkhole and pulled under. Two hours later, just before dusk, a family member found the beautiful three-year-old, blonde, blue-eyed girl and handed her lifeless body to the coxswain. She had drowned with her eyes open. The coxswain reported: ‘Yes, I had nightmares that night and woke up in a cold sweat. I do remember hugging my kids a lot that night telling them how much I loved them.'” 3

Sadly, this 16-year Coast Guard veteran only recently became aware of PTS; he is currently undergoing a lengthy medical board evaluation as a result of his 19 DOA recoveries and their lingering effects. PTS, if left untreated or in extremely severe cases, can persist for more than 30 days, at which time a diagnosis of post-traumatic stress disorder may be assigned.

Unfortunately, a post-traumatic stress disorder has been formally recognized as a psychiatric syndrome only in recent years, and our follow-up systems for monitoring those persons affected by stressful events are not yet as comprehensive as the other programs (e.g., for alcoholism). If a crew member is affected by PTS, the responsibility for tracking now rests with departing and receiving commands when a service member is transferred.

The Present
It was Memorial Day weekend 1994; the coxswain and another crew member were breaking in the station’s new Zodiac boat when they were tasked to respond to a boat collision. There was blood everywhere. The driver of the smaller boat seemed impaled on his steering wheel; his head was blue and purple, swollen and open to reveal his brain matter. And his right arm was nearly severed.

The other passenger in the smaller boat also had suffered severe head and knee injuries and appeared stunned and unresponsive. The coxswain recalls, “We performed CPR on the driver on our stokes litter until we did a hand-off to the 41-foot utility boat, which delivered the victim to waiting EMS shore personnel.”

The coxswain says he felt as if he has been on autopilot right up until they took the body away. It was almost like dreaming. The coxswain and others involved were debriefed by their local Emergency Medical Service (EMS) Critical Incident Stress Management team within 24 hours.

In the following days, the coxswain experienced a number of symptoms that appeared related to the incident, including suppressed appetite and sexual drive. He still has memories of the incident and can picture it in his mind. 4

PTS can affect Coast Guard boat crews and others who are exposed to unusually stressful events in the course of duty. It can directly affect the readiness of boat crews, reducing the availability or the effectiveness of our personnel resources.

When exposed to serious injury, death, and destruction, emergency service personnel can experience a variety of symptoms:

Dr. Peter Smith, the clinical director of Southern Maine’s EMS, the main provider of Critical Incident Stress debriefing services for Coast Guard Group Portland, Maine, notes that “these symptoms can be in various combinations in different individuals, manifested acutely or delayed for extended periods after an event.”

In January 1939, the Coast Guard’s employee assistance program with Maschoff Barr and Associates came on line, and each District’s Work-Life staff became a pivot point for coordinating major debriefings. The Work-Life staffs are administrative in nature and focus training and response in a wide variety of wellness and quality-of-life areas. Coincident with the servicewide effort, Dr. Smith made an outreach to the author’s former command and briefed area Coast Guard personnel on available national and local resources.

Officers-in-charge now can call their Regional Emergency Medical Information System at the onset of a case that is having or likely will have an impact on their crews’ readiness. Debriefers can and have been dispatched to assist OinCs while search-and-rescue cases are ongoing. In major cases, the District Work-Life staff becomes involved and coordinates and integrates the local EMS efforts with their own efforts. It is not uncommon for a Work-Life member to lead a debriefing team composed of EMS counselors, chaplain resources, and unit peer counselors. EMS and Work-Life debriefers not only can help OinCs make decisions but also can assess the impact of operations and readiness both during and after a critical event.

Taking Care of Your Personnel
Being ready to recognize the effects of PTS in boat crews takes a commitment by the officer-in-charge. At minimum, EMS personnel who may be called upon to debrief must visit the station semiannually for familiarization and training. This will keep EMS personnel in touch with the station’s routines and missions and will ensure that a familiar face is there to assist when needed. When EMS personnel learn Coast Guard jargon, they also earn credibility with the crews they serve.

Initial statewide preincident training on critical incident stress can take as much as half a day, but once introduced, it can be refreshed in about half an hour every six months. It is a small investment for such an important management tool.

Local EMS crews can do specialty training and counseling at the command’s request, as well. The advantage here is that the entire system of EMS ride-alongs, training, and ongoing support develops a relationship and familiarity with the care provider.

Another tool that group or air stations should consider is a memorandum of understanding between the EMS provider of debriefings services and the major Coast Guard unit in the area. Such a document defines roles, responsibilities, and expectations and, most important, provides continuity when military personnel transfer. Some EMS organizations will offer discounts for Coast Guard personnel going through their emergency medical training and other courses if a memorandum of understanding exists.

A chaplain’s role must be well defined. If the chaplain is trained in mental health and designated to lead a debriefing team after an incident, that role must be clearly articulated at the outset. Similarly, if the focus us on the chaplain’s role as a spiritual sounding board, that must be declared. Otherwise, victims of stressful events can become confused by the two very distinct roles a chaplain may play.

The Cape Elizabeth, Maine, Fire Department features a well-organized, well-trained Water Extrication Team that works with the local Coast Guard station and group for difficult rescues in the high-energy surf zones where the Coast Guard does not have an enhanced rescue capability. The team’s mental health checks involve hourly “howgozits” from their shore van to the small-boat coxswain. Using a self-assessment scale of one to ten, the coxswain polls each crew member on where the member believes he or she falls on the scale. If anyone, including the coxswain, reports himself or herself as a five, then it’s time to swap out crew. The shore van assesses the numbers based on a short checklist of observables and ultimately arranges for relief crews. Of course, some might question this method’s utility with Coast Guard crews, whose members are relatively young and known for their bravado.

Recommendations for the Future

Letting Go the Anchor and Nine Shots of Chain