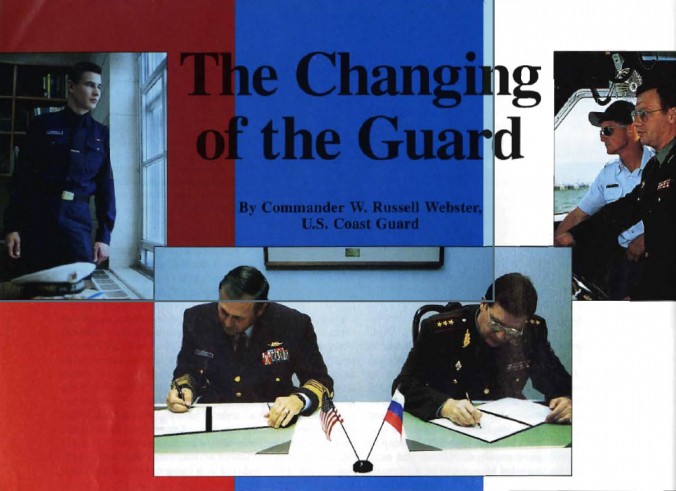 August, 1996 / Captain W. Russell Webster / Comments Off on The Changing of the Guard

In high demand as a teacher and role model for emerging-nation  navies,  the U.S. Coast Guard also is working  with the former Soviet Union’s  KGB Maritime Border Guards as it transitions  to a more multimission  organization.  Mutually  beneficial exchange efforts—from left, Russian Cadet Kiril Goussev, who will  graduate from the U.S. Coast Guard Academy in 1997; Admiral  Robert Kramek  and his Russian  counterpart,  General-Colonel Andrey  Nikolayev,  sign a memorandum  of understanding;  General-Colonel  Nikolayev during a recent visit to Governor’s Island, New  York—could  enhance cooperation from search and rescue to airfield  access.

The U.S. Coast Guard (USCG) is working with the former Soviet Union’s KGB Maritime Border Guards as it evolves into a more multimission, humanitarian organization. This cooperative transformation requires a significant effort and investment, because the Border Guards’ activities  traditionally  focused  on keeping potential defectors within, and spies out of, the geographic confines of the Soviet Union.

Prior to the end of the Cold War, the KGB’s Maritime Border Guards performed maritime police and warfare activities similar to those the U.S. Coast Guard’s Beach Patrol carried out during World War II: patrolling coastlines and canvassing borders and shores on horseback and with specially trained dogs. Until 1990, they operated approximately 200 combat ships  and  maintained  their own fleet of logistics craft. In general,  the  KGB  ships were similar to those of the Soviet Navy, but with  a reduction in antiair and antisubmarine capabilities in favor of heavier armament. According to Norman  Polmar’s Guide to the Soviet Navy, “in wartime the Border Guards would undoubtedly be used to supplement naval forces in combat operations, much the same as the U.S. Coast Guard operates  under Navy  control  in wartime.” 1

Since the breakup of the Soviet Union, the Maritime Border  Guards  have  undergone  at  least  three  organizational and name changes and now are known as the Russian Federal Border Service (RFBS), operating under its own  independent  ministry.  Its current  missions  include: maritime law enforcement, defense readiness,  search-and-rescue (SAR) support, counterintelligence, and counterterrorism. Table 1 gives a comparison of the RFBS’s and U.S. Coast Guard’s  missions.

The RFBS supports SAR with personnel, ships, and aircraft, but it does not yet have primary responsibility for this mission. SAR is managed by a ministry in Moscow and is handled by the Far Eastern Shipping Company. Unlike the situation in the United States, there are no recreational boats along Russia’s coastline to require services. The Far Eastern Shipping Company coordinates merchant-fleet SAR and dispatches tug resources as required. Fishing vessels are tracked by the fisheries companies, who  direct  other  fishing  vessels  to  assist  any in distress.

Also unlike the U.S. Coast Guard, the RFBS does not presently maintain maritime aids to navigation or participate in marine environmental protection; however, it can provide and has provided resource support to other agencies tasked with this responsibility. Major-General Voitenko, Deputy Commander, Northeastern Border Guard District, has “expressed interest in the Coast Guard environmental protection role and was interested in exploring cooperative environmental efforts between the two services.” 2

The U.S. Coast Guard’s role in assisting emerging nations in the creation and development of coast guards— a nation-building effort in support of U.S. foreign policy objectives—has expanded greatly with the end  of  the Cold War, the fractioning of coastal states, and developing countries’  increased  emphasis  on  preserving the marine environment. U.S. Coast Guard Commandant   Admiral   Robert   Kramek   has noted  that “there are  120 nations in the world lined up right now for our services. They want to model their navies and their coast  guards after the U.S. Coast Guard.” 3

To increase their knowledge  of each other’s maritime culture,  the U.S. Coast Guard and RFBS have completed 12 reciprocal ship visits since 1991: USCG cutters have visited the former Soviet Union 9 times and RFBS ships have been welcomed to the United States 3 times. The most recent exchanges saw USCGC Rush (WHEC-723) in Petropavlovsk in June 1995 and Anadyr, a Russian icebreaker, in Juneau,  Alaska,  in September  1994. 4 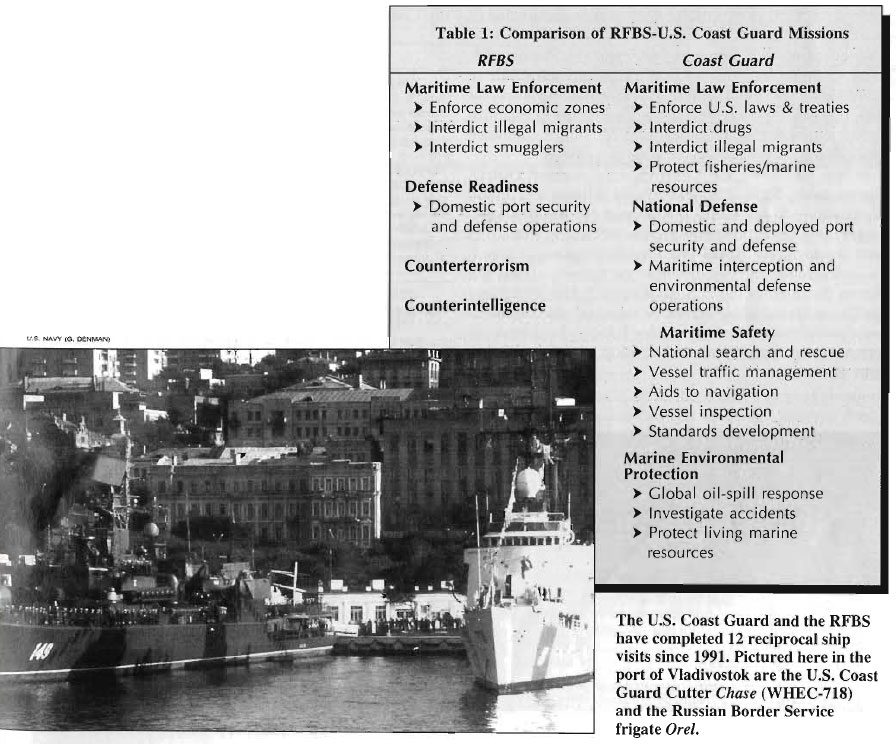 Other events arising from this visit included the recent attendance and graduation of an RFBS officer from the Reserve Training Center’s International Maritime Officer Course and an informational visit by four RFBS officers to the North Pacific Regional Fisheries Training Center in Kodiak, Alaska. In addition, the U.S. Coast Guard Academy is hosting a full-time Russian student, Kiril Goussev, who is scheduled to graduate with the class of 1997. Cadet Goussev sailed on board the USCG’s training Barque Eagle for his summer cruise in June 1994 and completed his second summer program studies with the RFBS in Russia.

The Coast Guard and RFBS also are exploring opportunities in 1996 for Coast Guard personnel to visit RFBS training institutions 5 and are considering an exchange of cadets during the summer, similar to the Coast Guard’s successful program with the Japanese Maritime Safety Agency (JMSA). 6 Typically, the JMSA and the coast Guard exchange two or three cadets, who complete a tour of shore, aviation, afloat, and administrative commands and spend five days on the Eagle.

In addition to visits and personnel exchanges, the Coast Guard and RFBS have embarked on a meaningful series of combined operational endeavors. As recently as June 1995, the USCG cutter Rush (WHEC-723) 1995  and a Russian Krivak III cruiser and icebreaker conducted a fisheries patrol of the North Pacific Anadromous Fishery pursuant to the U.N. moratorium on high seas drift-net fishing. Personnel from the Rush and the RFBS cruiser held prepatrol briefings and tours and embarked two officers from each other’s ships during the six-day patrol. One of the Rush’s officers accompanied the Russians on a fisheries boarding of a Japanese drift-netter. A Russian Ka27 helicopter pilot also received a familiarization ride in the Rush‘s HH-65 helicopter. 7 This patrol is the precursor for a summer 1996 exercise in the Bering Sea to establish service communications procedures for future combined fisheries endeavors. 8

In late July 1995, the Coast Guard’s Alaskan District Commander, Rear Admiral Ernest Riutta, expressed his gratitude to his RFBS counterpart for the Russians’ cooperation in two difficult search-and-rescue cases: “In each instance, the RFBS provided helicopters to search for individuals reported overdue on transits across the Bering Strait from the U.S. to Russia.” 9 The RFBS and the Coast Guard have agreed to continue this cooperative operational relationship, share SAR and fisheries information, as appropriate, and develop joint communications procedures.

The Future
Along with the prospect of increased fisheries enforcement and SAR cooperation , the growing relationship with the RFBS may open the door for Coast Guard use of airports in eastern Russia. The Coast Guard historically has operated its long-range C-130 aircraft from Alaskan airfields at Naval Air Station Adak and from an Air Force facility at Shemya, at the far western end of the Aleutian chain. But recent DoD initiatives have reduced the Coast Guard’s opportunities to use these facilities and made them more expensive because of civilian contracting costs.

Despite a myriad of red tape and other difficulties, Petropavlovsk’s airfield has been used successfully by U.S. commercial airlines on a number of occasions. Some Alaska Airlines flight crews have been denied entry into Russian airports, while others have been delayed while waiting for clearances or the arrival of a Russian navigator. 10 In short, the “typical” Russian airport experience could be lengthy, frustrating, and potentially disastrous for a Coast Guard flight crew who needed to gas-and-go during emergent operational conditions like SAR. Coast Guard and RFBS officials are continuing their dialogue to iron out the logistical problems that now preclude the use of Russian airfields as weather or fuel alternates during Coast Guard operations in the western Bering Sea.